Iowans have a way…

Iowan’s have a way of reminding us just how close we all are in this world that often seems so much bigger than ourselves. Smack dab in the middle of cornfields and insurance companies (yes folks, Iowa is the real corn state, not Ohio, not Idaho), Iowa is the heart of the Midwest, the melting pot. It is no surprise when you run into a neighbor, a friend from high school, or a cousin from a nearby town while out and about, in fact its darn near inevitable. Even with Des Moines, our beautiful capitol city, touted as the fastest growing city in America, it’s a little like Cheer’s where everybody knows your name.

You’ve probably heard of the concept, six degrees of separation, the theory that any two people on earth are just six or fewer acquaintances apart. Then there’s the celebrity version, six degrees of Kevin Bacon, the connectivity of any actor to Kevin Bacon (the center of the Hollywood Universe). We take this old parlor game to a new level in Des Moines, here’s how it happens.

Over the weekend Des Moines hosted its annual Home and Garden Show, where we brave the frigid cold to meander through various home project vendor booths hopelessly planning our spring honey do lists that can’t even begin for 6 more weeks, (thanks Punxsutawney!). As anyone who knows me can attest, I contract spring fever around Halloween and it takes over my soul until at least Easter. The Home and Garden show is a little remedy that at least distracts this California girl from the arctic tundra she fondly calls home. So when my mom asked me to tag along with her, I couldn’t pass it up. As we peer in the window to the show from the upper level skywalk we hesitate. “looks like a bunch of siding and garage doors” my mom says, “yeah, where are the gardens and the art?” I echo.

Just as we are about to change our minds we see a booth at the end of the skywalk and wander over to look. Blue House Pottery is owned by the dynamic duo Jim and Judith Miller of Clear Lake, Iowa. The two tag team to handcraft one of a kind pottery, each piece a story all it’s own. “He crafts the perfect symmetrical bowl or vase, and then I take over and tear it up!” Judith quips. By “tearing it up” she means she literally rips the clay and then sculpts it into something different entirely. Judith lets the clay “lead the way” when she alters the pieces and then picks glazes to enhance Jim’s original work. You can see the juxtaposition of the two artists in their joint effort. Jim a retired art teacher is a master of his chosen art form, you can find him throwing pottery live in the Cultural Building at the Iowa State Fair every summer, where most pieces sell before they even leave the wheel. 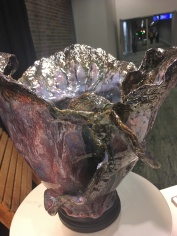 Jim tells me about his love for Frank Lloyd Wright and insists we visit Mason City to tour the Historic Park Inn of Wright’s legacy. He shows me magazine articles featuring his past students (one of which teaches now at UNI and taught Jim how to throw the larger vessels that grace their displays). Judith talks about their travels to different shows across the country, Oklahoma is their favorite, they meet up with fellow artists there every year and catch up on old times. I’m reminded of an old saying “never met a stranger” as we make fast friends with the Miller’s and I am humbled once again to live in the Heartland.

We wave adieu to our new friends and head downstairs. Speed walking through the aisles of bathtub fitters and Jacuzzi’s I think “well at least I’m getting my steps in”. We round a corner and I am awestruck, towering above me is a giant slice of a tree, 20 feet tall at least, it looks like someone cut it right down the center top to root. I see there are three more pieces leaning against it, all with their own markings, as unique as fingerprints. David Sokol of the Home Doctor in Woodward is seated beside the giant slab of walnut and stands to greet us, he is well over 6 ft himself and dwarfed next to this work of nature. “It’s cool isn’t it?” he says “we save trees from being burned down and then take them back to the warehouse split them and dry them out in a kiln so we can turn them into something like this” he points to a table fit for the last supper, cut from a salvaged tree and clear coated to shine like glass. It’s stunning! David shows us a book of his handiwork and tells me of the creative process, his clients give him an idea and he makes it happen. From furniture to entire home remodels, nothing cookie cutter about them, each project is a custom work of art. “I’ve yet to find a challenge I couldn’t create he says” you can tell he is passionate about his talent. When I asked where he learned to do this he says ”actually my high school art teacher, he has a pottery booth upstairs” David says and points to the skywalk window. “That wouldn’t be Jim Miller would it?” I ask half joking. “Yep!” David smiles. 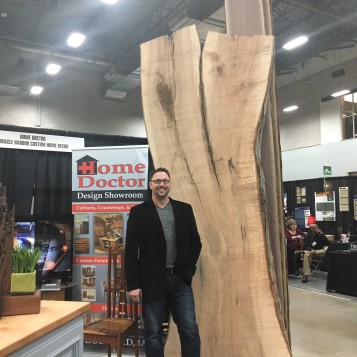 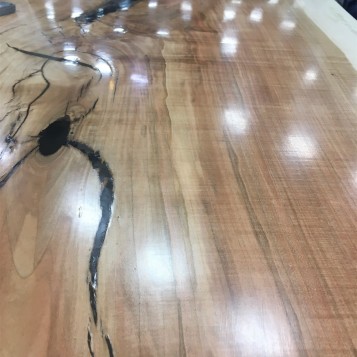 After we watch a video slideshow of some of the Home Doctor’s award winning handiwork, (they won People’s Choice last year) we realize the Home and Garden Show closes in half an hour and we’ve only made it to two booths. We high tail it on.

Wouldn’t you know it, the space under the skywalk has been made over like a beautiful park, garden centers, and landscaping companies have recreated it to look like a lush gardens. As I debate sending a letter to the event company suggesting they put the highlight of the event in a more visible area next year, my mom climbs into a giant Adirondack chair and hollers “take my picture!” as she does her best Edith Ann impression, “and that’s the truth!”

We skip through the gardens like Dorothy on the road to Oz and come to a a water feature made out of galvanized metal, glass orbs and tiny air plants, it’s rustic and modern all at once. We take a rest on one of the outdoor sofas and I start dreaming of redoing my patio when Scot Lewton steps over, “ladies looking for anything special at the show today?” “Nah just getting some inspiration” I say. Scot is with Boss Complete Outdoor Solutions, we get to talking, I ask if I can take a couple photos for my blog. I mention I only have a handful of followers since this started as a school project. I tell Scot I am a student at Simpson and he laughs “Simpson, what a great college, I just helped Bob Darrah (legendary Simpson wrestling coach) curate his memoir, published it in December!” Scot says, ” give me your info kid and I’ll get you a copy.” I start laughing and we tell him about our other encounters of the evening, how Iowa is so connected like this. Over walks the Operations Director for Boss, Dani Comer, “yeah we are all just six degrees off of our surroundings.” she says and grins. 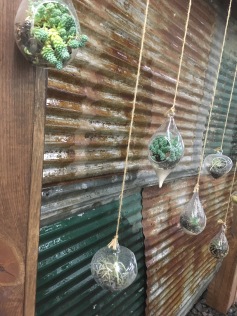 Until next time, think spring!

P.S. If you decided to stick around another week in Des Moines you ought to check out the Blue Ribbon Bacon Fest

See what I did there?